It is important to understand that due to the complexity of DNA based testing and
the important implications of the test results, we strongly suggest you consult your doctor
or a genetic counsellor to help interpret your results.

By ordering this test you will be testing for
the complete list of diseases and conditions as explained in the Genetic Health Test panel of tests.

Postal and Delivery times are constantly changing. Whilst every effort is made to
reduce time where possible this cannot always be achieved due to actions outside our control.
The times quoted are from the time the final sample is received.

International Biosciences provide genetic testing to determine your genetic predisposition for many important health conditions including cancers, cardiovascular/cerebrovascular conditions, diabetes and obesity. Knowing which genetic disorders and diseases you are at risk from will allow you to plan to reduce it by making lifestyle changes such as diet and exercise. 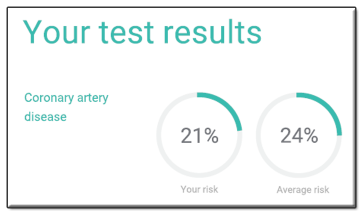 Click here for step-by-step instructions detailing how to do a Genetic Predisposition test.

Scope of the Genetic Test

The purpose of this molecular genetic test is to ascertain whether you, or the person being tested, are carrying mutation(s) predisposing to or causing the specific conditions or diseases covered by the test. It is important to understand that due to the complexity of DNA based testing and the important implications of the test results, you may want to consult your doctor or a genetic counsellor before ordering. This genetic predisposition report is provided to you for informational and educational purposes, and it does not replace a visit to a doctor, nor does it replace the advice or services of a doctor.

Nature of the Genetic Test

The molecular genetic test is based on the study of SNP (Single Nucleotide Polymorphisms) which are genetic sites that vary between individuals with an incidence equal to or higher than 1%. Since this technique looks at the sites that differ most from one individual to another, this test is very successful at identifying DNA markers associated with diseases or conditions. Techniques based on SNP provide information about the most common variation in the human genome for research – and you – to study. It is important to keep in mind that rare variations that affect certain diseases may not be covered by a SNP test as they still have not been discovered, or because their incidence is very low.

Limits of the Genetic test

The information presented in this report is based on the latest scientific research. The diseases included in this report have generally been replicated in more than one important ethnic group. This yields a lot of confidence to the results reported. However, we cannot exclude the possibility that future research may improve upon the accuracy of the results. It is also important to note that not all disease associations have been reported for all ethnic groups and for this reason, genetic research is not comprehensive. When a disease association for your ethnicity has not yet been reported, the closest ethnicity can be used to generate the part of the report covering said disease association; in which case it will be mentioned in the report which ethnicity is assumed for each disease covered. A genetic test based on SNP cannot reveal large microsatellite genome rearrangement, insertion/deletion events or copy number variations.

How to Interpret Your Genetic Predisposition DNA Test Results

The 34 diseases and traits currently covered by our genetic predisposition test are:

Alzheimer’s Disease
Alzheimer’s disease is the most common form of dementia. It is incurable, degenerative and terminal. Generally, it is diagnosed in people over 65 years of age, although the less-prevalent early-onset Alzheimer’s can occur much earlier. Read more about Genetic Predisposition to Alzheimer’s Disease.

Coeliac Disease
Coeliac disease is an autoimmune disorder of the small intestine that occurs in genetically predisposed people of all ages from middle infancy upwards. Symptoms include chronic diarrhea, failure to thrive (in children) and fatigue. Read more about Genetic Predisposition to Coeliac Disease.

Coronary Heart Disease
Coronary heart disease is the leading cause of death in the the United Kingdom, United States and Canada, killing one person every 30 seconds in these countries alone. Even when medical intervention is successful, the physical capabilities of the body are often severely impaired. Read more about Genetic Predisposition to Coronary Heart Disease.

Gastric Cancer
Stomach or gastric cancer can develop in any part of the stomach and may spread throughout the stomach and to other organs; particularly the esophagus, lungs and the liver. Stomach cancer is the fourth most common cancer worldwide. Read more about Genetic Predisposition to Gastric Cancer.

Graves’ Disease
Graves’ disease is an autoimmune disease. It most commonly affects the thyroid, causing it to grow to twice its size or more (goiter), be overactive, with related hyperthyroid symptoms such as increased heartbeat, muscle weakness, disturbed sleep, and irritability. Read more about Genetic Predisposition to Graves’ Disease.

Lung Cancer
Lung cancer is a disease of uncontrolled cell growth in tissues of the lung. This growth may lead to metastasis, which is the invasion of adjacent tissue and infiltration beyond the lungs. Lung cancer is the most common cause of cancer-related death in men and the second most common in women. Read more about Genetic Predisposition to Lung Cancer.

Lupus
Lupus is a chronic autoimmune connective tissue disease that can affect any part of the body. As occurs in other autoimmune diseases, the immune system attacks the body’s cells and tissues, resulting in inflammation and tissue damage. There is currently no cure. Lupus can be fatal, although with recent medical advances, fatalities are becoming increasingly rare. Read more about Genetic Predisposition to Lupus.

Migraine
Migraine is a neurological syndrome characterized by altered bodily perceptions, headaches, and nausea. The typical migraine headache is unilateral and pulsating, lasting from 4 to 72 hours. Symptoms include nausea, vomiting, photophobia (increased sensitivity to bright light), and hyperacusis (increased sensitivity to sound). Read more about Genetic Predisposition to Migraine.

Multiple Sclerosis
Multiple sclerosis (MS) is an autoimmune condition in which the immune system attacks the central nervous system. The disease onset usually occurs in young adults and it is more common in females. There is no known cure for MS. Treatments attempt to return function after an attack, prevent new attacks, and prevent disability. Read more about Genetic Predisposition to Multiple Sclerosis.

Obesity
Obesity is a medical condition in which excess body fat has accumulated to the extent that it may have an adverse affect on health, leading to reduced life expectancy. Obesity is a leading preventable cause of death worldwide and it is viewed as one of the most serious public health problems of present times. Read more about Genetic Predisposition to Obesity.

Peripheral Vascular Disease
Peripheral vascular disease includes all diseases caused by the obstruction of large arteries in the arms and legs. The prevalence of peripheral vascular disease in people aged over 55 years is 10%-25% and increases with age; 70%-80% of affected individuals are asymptomatic; only a minority ever require revascularisation or amputation. Read more about Genetic Predisposition to Peripheral Vascular Disease.

Psoriasis
Psoriasis is a chronic, non-contagious autoimmune disease which affects the skin and joints. It commonly causes red scaly patches to appear on the skin. Psoriasis affects both sexes equally and can occur at any age, although it most commonly appears for the first time between the ages of 15 and 25 years. The prevalence of psoriasis in Western populations is estimated to be around 2 to 3% Read more about Genetic Predisposition to Psoriasis.

Rheumatoid Arthritis
Rheumatoid arthritis is a chronic, systemic inflammatory disorder that attacks the joints and often progresses to destruction of the articular cartilage of the joints. About 1% of the world’s population is afflicted by rheumatoid arthritis with women three times more likely than men to be affected. Onset is most frequent in 40 to 50 years, but no age is immune. Read more about Genetic Predisposition to Rheumatoid Arthritis.

Skin Cancer
Skin cancer is a malignant growth on the skin. There are more than 100,000 new cases reported in the United Kingdom each year. The majority of these are called Basal Cell Carcinomas. Carcinomas are usually localized growths caused by excessive cumulative exposure to the sun and do not tend to spread. Read more about Genetic Predisposition to Skin Cancer.

Type 1 Diabetes
Type 1 diabetes is an autoimmune disease that results in destruction of the insulin-producing beta cells of the pancreas. Type 1 is lethal unless treated with exogenous insulin. Injection is the traditional and still most common method for administering insulin. Read more about Genetic Predisposition to Type 1 Diabetes.

Type 2 Diabetes
Type 2 diabetes is a disorder that is characterized by high blood glucose in the context of insulin resistance and relative insulin deficiency. There are an estimated 3 million people in the United Kingdom with diabetes with 2 million being diagnosed, 90% of whom are type 2. Read more about Genetic Predisposition to Type 2 Diabetes.

Venous Thromboembolism
Venous thromboembolism is the formation of a blood clot (thrombus) inside a blood vessel, obstructing the flow of blood through the circulatory system. It can result in deprivation of oxygen in the adjacent area, and/or infarction, a mode of cell death. Read more about Genetic Predisposition to Venous Thromboembolism.

Open-Angle Glaucoma
Glaucoma is a term for a group of eye disorders which result in damage to the optic nerve. This is most often due to increased pressure in the eye. Open-angle chronic glaucoma is painless, tends to develop slowly over time and often has no symptoms until the disease has progressed significantly.

Exfoliation Glaucoma
Exfoliation Glaucoma is an aging–related systemic disease manifesting itself primarily in the eyes which is characterized by the accumulation of microscopic granular amyloid-like protein fibers.[2] Its cause is unknown, although there is speculation that there may be a genetic basis.

Alopecia
Alopecia Areata, also known as spot baldness, is an autoimmune disease in which hair is lost from some or all areas of the body, usually from the scalp due to the body’s failure to recognize its own body cells and destroys its own tissue as if it were an invader.

Basal Cell Carcinoma
Basal-Cell Carcinoma – a skin cancer, is one of the most common cancers in the United States. It rarely metastasizes or kills. However, because it can cause significant destruction and disfigurement by invading surrounding tissues, it is still considered malignant.

Osteoporosis
Osteoporosis is a disease where decreased bone strength increases the risk of a broken bone. It is the most common reason for a broken bone among people who are old. Bones that commonly break include the back bones, the bones of the forearm, and the hip.

Sugar Consumption
Added sugar is the single worst ingredient in the modern diet. It provides calories with no added nutrients and can damage your metabolism in the long run. Eating too much sugar is linked to weight gain and various diseases like obesity, type II diabetes and heart disease.

Folate Metabolism
Food supplement manufacturers often use the term folate for something different from “pure” folic acid. Folate indicates a collection of “folates” that is not chemically well-characterized, including other members of the family of pteroylglutamates, or mixtures of them, having various levels of reduction of the pteridine ring, one-carbon substitutions and different numbers of glutamate residues.

Vitamin B6 Metabolism
Vitamin B6 refers to a group of chemically very similar compounds which can be interconverted in biological systems. Vitamin B6 is part of the vitamin B complex group, and its active form, Pyridoxal Phosphate serves as a cofactor in many enzyme reactions in amino acid, glucose, and lipid metabolism.

Vitamin B12 Metabolism
Vitamin B12 also called cobalamin, is a water-soluble vitamin with a key role in the normal functioning of the brain and nervous system, and for the formation of blood. It is normally involved in the metabolism of every cell of the human body, especially affecting DNA synthesis and regulation, but also fatty acid metabolism and amino acid metabolism.

WE'RE HERE TO HELP
Request a call back